SILVER SPRING, MD, January 9, 2019 — Mercaris, a data service company bringing market intelligence to sustainable agriculture, dedicated its first 2019 market update to the organic commodity import data that would otherwise be available from the U.S. Department of Agriculture (USDA). Currently unavailable from the USDA due to the country’s second longest government shutdown, Mercaris estimates that U.S. buyers imported a total of 2,200 MT of organic corn in November 2018 and 2,300 MT in December 2018.

Assuming Canada maintains its Q3 pace the country is set to be the largest country of origin for organic corn imports in November and December 2018, a status Canada has never before achieved. Most striking though is the apparent lack of imports from Argentina, the Black Sea, or almost anywhere else. Based on U.S. Customs and Border Protection data, Mercaris estimates the only significant volumes of maritime imports in November and December were sourced from Brazil. This is particularly notable given that these shipments are the first organic corn imports from Brazil since August 2013. 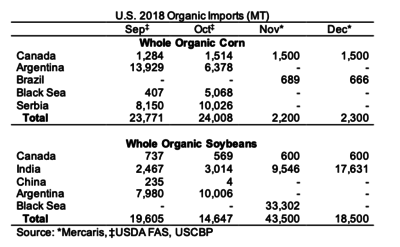 Per Mercaris’ estimates, organic soybean imports increased in November and December 2018. Imports from India rebounded in November, with further gains occurring in December. Mercaris estimates November also saw a spike in imports from the Black Sea region, solely supported by a sudden jump in imports from Turkey. Additionally, it appears that the U.S. did not receive shipments of organic soybeans from either Argentina nor China over November and December. However, this is not too unusual. Through 2018 U.S. imports from Argentina have been sporadic, with zero imports occurring in six of the ten months reported thus far by the USDA. China is a bit more unique, but also unsurprising considering the recent downtrend in imports from the country. Altogether, U.S. organic corn and soybean imports continued moving lower year over year as 2018 came to an end.

“As 2019 begins it will be crucial to watch how trade develops, if imports are able to find their footing and recover, or if they will continue to slowly shrink away,” said Kellee James, co-founder and CEO at Mercaris. “Established and verified sources of government data will certainly play a critical role in monitoring these developments. However, until the shutdown ends, Mercaris will continue fill in the gap with market insights and estimates.”

Since 2013, Mercaris has been helping its customers capitalize on growing demand for organic and non-GMO foods by providing market access and services tailored to the needs of the identity-preserved agriculture industry. Mercaris focuses its data and services on identity-preserved commodities, including organic and non-GMO corn, soybean, meal, and wheat markets across all regions of the United States and Canada, and recently launched an organic dairy initiative. Mercaris also maintains an online Auctions Platform, a pioneering tool that enables buyers and sellers to find new markets and more profitably trade organic and non-GMO commodities.