Cold, snow could push the end of harvest well into December for many key organic corn states

Nov. 13, 2019 (SILVER SPRING, MD) – About half of U.S. organic corn acres are still in the field across the Midwest, and snow could push the end of harvest further into December for some states, according to the November 2019 Monthly Market Update from Mercaris.

As of Nov. 9, the pace of U.S. corn harvest was about two weeks behind the five-year average due to a combination of late spring planting and a cold wet fall.

“We are watching to see just how much progress farmers were able to make last week. With snow and cold returning, any warm stretches of weather will be crucial for this year’s harvest,” said Ryan Koory, Director of Economics at Mercaris. 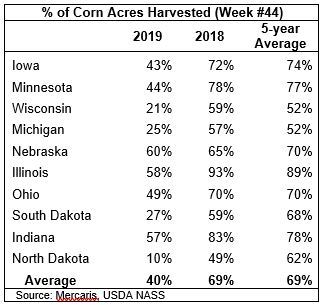 The return of cold and snow to many major organic grain-producing states including North Dakota, South Dakota, Minnesota and Wisconsin could continue to keep farmers out of the field and push the end of harvest well into December, the report states. That delay would further lower crop yield and quality expectations.

“It’s difficult to speak with any level of certainty about production this year when half of the corn crop is still in the field,” Koory said in the report. “What can be said is this: the weather this harvest season isn’t offering much in the way of an apology for this year’s planting conditions.”