March 11, 2020 (SILVER SPRING, MD) – Organic poultry production is expected to grow through 2020, but Q1 numbers indicate that growth will be slow. If the trend continues, organic grain markets could suffer the consequences.

The Mercaris Monthly Update for March shows Sept.-Jan. broiler slaughter down 2% over the same period the previous year, due in part to shutdowns in processing during the Thanksgiving and Christmas holidays. Despite rebounding numbers in January, the current rate of production would put growth in meat production at under 1% for the 2019/20 market year. 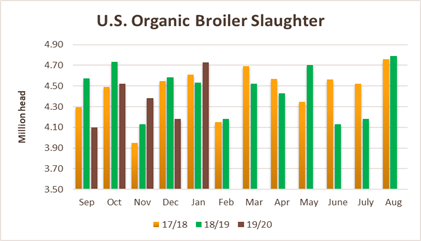 “It will be critical to keep a watchful eye on organic broiler slaughter volumes over the coming months as the majority of organic grain in the U.S. is destined to supply the organic livestock industries with feed,” said Ryan Koory, Director of Economics at Mercaris.

This is not a new situation, Koory said. Broiler slaughter was below the previous year’s totals in five months of the 2018/19 market year.

“With organic poultry being a huge demand driver, this slower growth in organic broiler production volumes raises questions about implications for the rest of the grains market as the 19/20 market year progresses,” he said.