Dec. 10, 2019 (SILVER SPRING, MD) – U.S. imports of organic commodities are up 5 percent over last year’s pace. Coupled with flat demand in feed markets, prices appear to be responding, down 4 percent year-over-year, according to the December market update from Mercaris, the nation’s only organic and non-GMO data and trading company.

The first quarter of the new market year closed at the end of November with indications that buyers are seeking to fill supply concerns following a poor 2019 organic corn harvest. Mercaris estimates that as of Dec. 1, approximately 15 percent of the U.S. organic corn crop remained unharvested, nearly three weeks behind the 5-year average. Michigan, North Dakota and Wisconsin have seen the most significant delays. 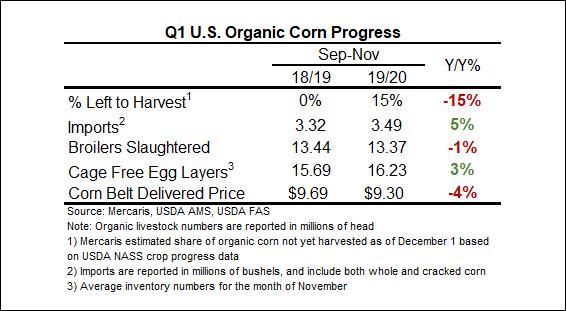 “Organic corn markets are stuck in the mud at the moment as purchasers size up this year’s crop and strike a balance between import needs and feed demand growth,” said Ryan Koory, Director of Economics at Mercaris.

Koory noted that prices typically decline in Q1 of the market year as harvest progresses, but this year’s decline is greater than 2018 and is surprising given the significant weather challenges that have lowered crop production expectations.

“The questions left standing at the moment are ‘Will reduced U.S. production bring a boost to prices in Q2?’ or ‘Will imports and slack feed demand keep prices subdued?’ So far, the market seems to be leaning towards the latter,” Koory said.